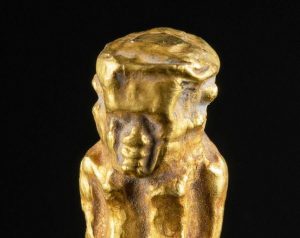 Considered a mythological creature, serpents held special significance in many pre-Columbian civilizations. In some Mesoamerican cultures, serpents specifically represented Quetzalcoatl, the feathered deity of wind, air, and learning. In the upcoming Variety Sale, Artemis Gallery will present a pair of gilded copper tupus or pins that each resemble a two-headed serpent. They were likely forged between 300 and 100 BCE.

A diogenite meteorite slab from the Vesta asteroid is particularly highlighted as well. According to the lot essay, the Vesta asteroid was one of the largest objects in the Milky Way’s asteroid belt. As the rocks collided, this four-billion-year-old piece landed on Earth. Also featured is an Egyptian amulet of Pataikos. In ancient Egypt, Pataikos was believed to be a god of protection, worshipped from the time of the Old Kingdom (2686-2160 BCE). The figure is depicted as a dwarf with short, crooked legs and a bald head. Visit LiveAuctioneers for the complete listings and to place a bid.