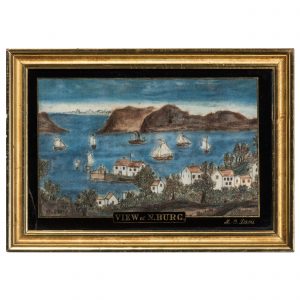 In the upcoming two-day sale, Cowan’s Auctions will feature an 1835 oil portrait of a young boy, identified as Jonathan Southwick. The child is dressed in a bright red outfit with gold buttons and white frill. In his hands is a hoop toy. This painting includes a small detail of interest in the background, showing the same boy running with his toy along the street. Other available pieces of fine art include an American folk portrait from the early 19th century, a fruit still life piece from blacksmith-turned-artist Henry Church, Jr., and a portrait of Thomas McKenney.

This Furniture, Decorative Art, and Folk Art auction will highlight vintage Americana items, including three antique vehicles. Among these, a 1938 Chrysler Royal sedan stands out. The car was used in the 1993 film Lost in Yonkers and remains in good condition. The available furniture lots will include a Victorian mahogany huntboard from Alexander Roux, a French-American furniture maker based in New York. The lot includes several intricate fruit and animal details. Though Roux was best known for his Rococo furniture pieces, he closely followed the popular styles of the 19th century to keep up with the industry. A Regina Company upright disc music player and a neon jukebox from the 1940s will be featured as well. Register to bid for the above items and browse the full catalog on the Cowan’s Auctions website