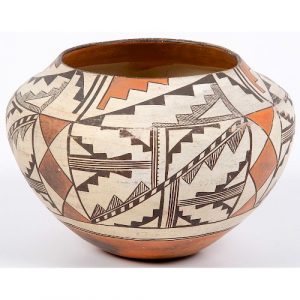 The warmth a Moki blanket brought the Navajo people during long winters made it one of their most prized possessions. Moki blankets and rugs, like the one available in the American Indian Art Auction by Cowan’s, are among the most popular forms of Native American decorative art for collectors. In total, the auction has 179 lots. Each represents an important aspect of Native American culture, from weaving to horse riding.

Among the lots with the highest estimated value is a pictorial weaving by Karen Benjamin titled “Red Planet”. It achieves its striking appearance with a mixture of green, red, and purple hues, each hand-dyed. Another notable piece is the previously-mentioned Moki-style rug, made by Mary Begay.

Several horse saddles and other equestrian equipment, including a parade saddle, bridle, and breastplate from L.V. Frazer are included in the auction. The pieces were made in the second half of the 20th century. Another set is a show saddle, bridle, and breastplate from Tex Tan. It commemorates the 50th anniversary of the American Quarter Horse Association.

A more unusual piece is a colorful candelabra sculpture by Joan Hanley. Hanley, who passed away in February of this year, was a painter, sculptor, photographer, and illustrator. The vibrant colors of the rabbit holding a candelabra are a testament to Hanley’s diverse body of work. Register to bid and view each lot on .