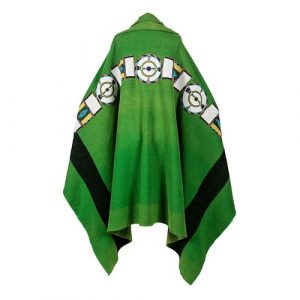 Native Americans have been known for their expressive works of art for hundreds of years. This art often showcases social customs as well as political and military systems. Cowan’s Auctions is showcasing works from a variety of Native American tribes in the upcoming sale, including Sioux, Southern Cheyenne, Navajo, Apache, and others.

Featured in the American Indian Art auction is a Sioux Elk Dreamer Society beaded hide tobacco bag. The Elk Dreamer Society was a spiritual group within the Sioux culture, along with Bear, Wolf, and Buffalo variations. This particular tobacco bag is sinew-sewn and includes a variety of blue, green, pink, red, black, and white beads. The late 19th-century bag depicts a warrior dressed in a bonnet as well as a horse, rider, and two pipes. The opposite side of the bag contains images of a brightly colored elk and the Elk Dancer with hoop and staff.

Also found in the sale is a Navajo Yei rug. These weavings represent traditional dancers as they perform the ceremony of the Yei – the spirit deity of the Navajo Nation. These ceremonies intended to either attract or exorcise spirits as directed by the shaman. Visit Bidsquare to view the entire art collection and register to place a bid.