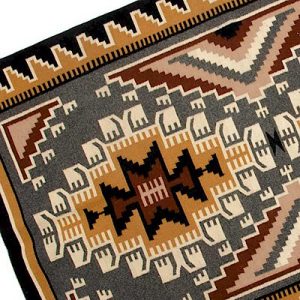 Originally, tomahawks were stones fastened to wooden handles. It wasn’t until the Europeans introduced metalwork to the American Indians that tomahawks such as this one, available in the American Indian and Western Art auction presented by Cowan’s Auctions, were possible. Sadly, in the years ahead, American Indian tribes would often need to use tomahawks to defend themselves against the very people who showed them how to make it.

Among the best lots with a low estimated price is an untitled drawing by Inuit artist Simon Tookoome. The piece provokes a sense of doubt and issues with identity. The lots with the highest estimated value are the previously-mentioned tomahawk head and a Navajo-style rug by Susie Yazzie. The rug was created using the traditional Navajo storm pattern weaving method. The history of storm pattern weaving was never written down, causing historians to speculate over its origins and significance to the Navajo.

The auction of tribal art primarily presents everyday items such as tomahawks, rugs, and moccasins, along with fine art, used by people from several American Indian tribes. Bidding in this auction began on July 25th and will end on August 5th. With the starting bids of many lots sitting below $100, there are many opportunities for beginning collectors to acquire one or more lots. Those interested in any of these lots can view each one and bid on Bidsquare until August 5th.