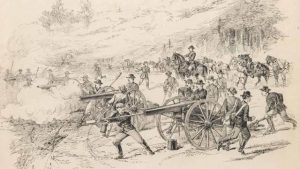 From stereoscopic images of Yellowstone National Park to rare war letters from the Nez Perce, the American History: Timed auction presented by Cowan’s Auctions has something for every collector and history lover. Featured in the auction are 85 stereoviews of Yellowstone National Park. This includes pictures of Old Faithful Geyser, Grotto Geyser, and Beehive Geyser along with pictures of the Grand Canyon, Liberty Cap Hotel and Valley, Angel Terrace, and more.

Also showcased is a letter addressed to Major Jackson during the Nez Perce War from Fort Lapwai in 1872. In the letter, the writer is urging Major Jackson to take a certain soldier under his care and warn him of the troubles from the citizens. Highlighted items include an atlas map of the Civil War ORs, a collection of 12 newspapers, pamphlets and other media regarding the Battle of Shiloh. Visit Cowan’s Auctions to view all 364 lots and to place a bid today.