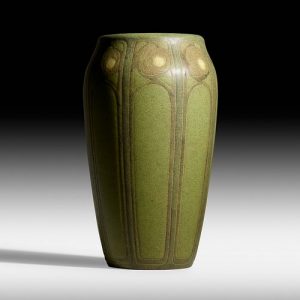 After completing college, Arthur Eugene Baggs joined Dr. Herbert James Hall in teaching patients pottery for occupational therapy at a Massachusetts sanatorium. After running the program, called Marblehead Pottery, for many years, Baggs converted it into a company in 1915. It continued to operate under his direction until its closure in 1936. Over the years, Marblehead gained international recognition for its high-quality items glazed in a hard, pebbled matte finish. Available in the upcoming Rago auction of American and European Ceramics is a scenic tile from Baggs for Marblehead Pottery. The tile shows trees in the muted greens and earth colors of the New England coast.

This sale also highlights several Tiffany lamps. Tiffany Studios introduced lamps at the beginning of the 20th century. From the late 1890s through the 1920s, the company produced a broad variety of mosaic glass shades, many featuring geometric and floral motifs. The patterns invoked both the far-reaching Arts & Crafts movement and Art Nouveau. Early 20th-century furniture will be offered in this event as well, including Art & Crafts chairs, tables, and bookcases. View the full catalog and bid online on Bidsquare.