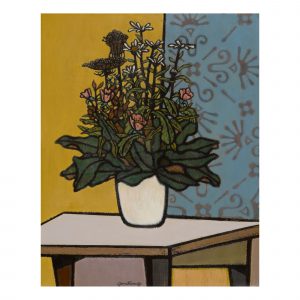 “His pictures are still springs of refreshment in the heat and turmoil of the world,” said the New York Daily Tribune in 1873 about the work of John Frederick Kensett. Kensett’s painting, Marine Scene is among the most noteworthy lots in the upcoming American Art Auction, presented by Sotheby’s.

John Frederick Kensett was one of the most well-known members of the Hudson River School art movement. In the 19th Century, these artists produced landscape paintings influenced by Romanticism. Other members of this movement also have notable pieces in this auction, including Albert Bierstadt’s South and North Moat Mountains. The painting was included in numerous exhibitions across the United States to represent the Hudson River School movement. The full list of exhibitions that included “South and North Moat Mountains” is available in the lot’s description.

Besides work produced by members of the Hudson River School is an illustration of Madeline, the popular children’s book and television cartoon character. The illustration is another noteworthy piece that shows the girls of Madeline’s French boarding school brushing their teeth. It was created by Madeline’s creator, Ludwig Bemelmans. Although Madeline is set in France, Bemelmans moved to America in his childhood and spent most of his adult life there. Those interested in any of these pieces can register to bid on Sotheby’s.