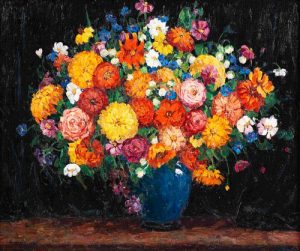 Nature is often dramatized in Marvin Cone’s paintings, providing a testament to his belief that art should comment on life. Cone was a graduate of the Art Institute of Chicago but spent most of his career in rural Iowa, the landscape that inspired his artistic style. He was also friends with Grant Wood, another prominent Iowan artist known for such works as American Gothic. A piece from Wood is featured alongside Cone’s Cloud Painting (circa 1934) in the upcoming American and European Art sale. Auctioned by Hindman, Cone’s work reveals layers of colors that create towering cumulus clouds, hills below, and two birds soaring together in the sky.

Lady by a Window (1918) is from another American artist, Louis Ritman, known for his Impressionist depictions of nude women. The sale of the oil painting will benefit the Ann & Robert H. Lurie Children’s Hospital of Chicago. Works from European artists are also featured in the event, including Pablo Picasso’s 1920 gouache on paper piece and Gaston Lachaise’s sculptures of powerful, full-figured women. The latter artist often stated that his inspiration was his wife and muse, Isabel Dutaud Nagle. Other finds include a painting titled Two Magenta Waterlilies by Joseph Stella. Bid for these lots online at Bidsquare.