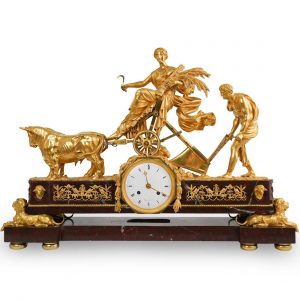 A product of the Napoleonic era, French Empire mantel clocks were elaborately-decorated pieces inspired by antiquity. Several examples of the style highlight Akiba Antiques‘ Eclectic Collection of Estates Worldwide sale. That includes a 19th-century mantel clock in gilt bronze and red griotte marble. Decorating the clock is an allegorical scene with a man, his plow, and a harvest goddess.

Collectors will also find numerous sculptures by Ernest Trova, such as Radical Cut Figure. Produced in 1979, replicas of this piece are still given to winners of the CFDA Fashion Awards. Notable recipients include Ralph Lauren and Marc Jacobs. Radical Cut Figure is an example of Trova’s Falling Man, a figure he spent decades reimaging. “Seriality is as essential to [Trova’s] work as it was to Warhol’s,” said one of Trova’s supporters. “Trova invented this great symbol of human fallibility through processing and reprocessing the image.”

Another sculpture featured in this event is Arman’s Accumulation of Violins. Inspired by Dadaism and Pop Art, Arman’s found-object works explore mass production and consumer culture. With Accumulation of Violins, Arman stacked and fused bronze versions of the instrument. Some of the violins are fully intact, while others are cut in half, forming a sculpture that is both towering and purposefully cluttered. Those interested in this or any other piece can view the full catalog and register to bid on LiveAuctioneers.