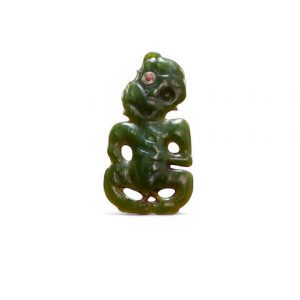 Traditionally, the Yombe people of southern Africa believed that power figures hunt down thieves and those who use magic to cause illness. An example of one such sculpted power figure is among the lots available in the upcoming African, Oceanic, and Pre-Columbian Art auction, presented by Bonhams. Its composition, from its forward-leaning shoulders to the boar’s tusks in its gut, is meant to intimidate wrong-doers. Each of the auction’s 127 lots represents civilizations across Africa, Oceana, and the Americas.

A leading lot in this auction was sourced from the collection of James Thomas Hooper. After fighting in World War I, Hooper realized it was increasingly hard to acquire ethnographic pieces from around the world. Worried about their preservation, he hunted through markets across the U.K. to find ancient art. Despite collecting pieces from numerous distant civilizations, Hooper never left his native England. Representing Hooper’s collection in this auction is a pendant from the Maori people. The right eye is made from paua shells and sealing wax to create the illusion of a pupil. Greenstone gives this piece its striking color.

The auction’s featured lots will also include a mask from the Bobo people, an ethnic group who mostly live in Burkina Faso. Historically, the Bobo lived in dry areas and believed they needed to be forgiven of sins before receiving rainfall. Masks, including the one presented in this auction, were used in rituals to earn this forgiveness. This particular mask’s long face is paralleled by its long horns and is decorated with red, white, and blue pigments. View each of these lots and register to bid on Bonhams’ website.