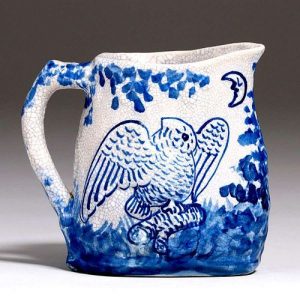 Born in Wisconsin, Gustav Stickley learned his trade while working in his uncle’s chair factory. Stickley and his four brothers soon started manufacturing furniture for themselves. He launched Mission Furniture and built his brand around hand-crafted, simple, well-made designs with natural materials. Stickley also published a popular monthly magazine, The Craftsman, from 1901 until 1916. His furniture and magazine targeted America’s burgeoning middle class and made Stickley a household name. Seven furniture pieces by Stickley are featured in the upcoming auction, presented by California Historical Design – AC Stickley. The furniture available in this auction represents the American Arts and Crafts movement that flourished in the early 20th century.

Beyond furniture, the sale also offers over 200 lots of decorative art. One of the leading items is a vase by Grueby Pottery. Inspired by the matte glazes at the 1893 World’s Columbian Exposition in Chicago, William Henry Grueby began making pottery and developed a novel range of glazes. His iconic cucumber-green matte glaze, a hallmark for the company’s pottery, made him one of the most recognized American potters. The available vase from 1905 features hand-molded leaves. A landscape oil painting by Sam Hyde Harris, titled Hidden Valley, is also available. View any of these lots and register to bid on Bidsquare.