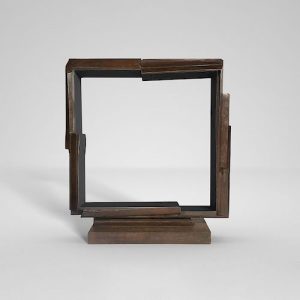 When Tadeusz Kantor, the noted playwright, began painting, the public mostly disregarded his efforts. “[N]o one knew whether he was to be seen as an important theatrical figure or as a visual artist,” writes the art magazine Frieze. But nearly thirty years after his death, the upcoming Abstracted: Post-War & Contemporary Art auction, presented by Capsule, especially features two lots by Kantor.

His paintings in this auction, IV and XI, both include disorienting black lines. Shapes emerge that appear familiar but are not easily identifiable. These pieces come to auction from the estate of Frank Loesser and Jo Loesser, the Tony-nominated actress who passed away earlier this year.

Like Kantor’s paintings, many of the auction’s lots are experimental. A notable example is Egg born by night by the Russian-American artist Ernst Neizvestny. From a broken eggshell hatches fragments that look both human and mechanical. This oil painting was produced in 1984, years after Neizvestny was exiled from the USSR. Despite his exile, many still considered his work to be emblematic of life in Russia. This included American playwright Arthur Miller, who referred to Neizvestny as the “philosophical conscience of his country.”

Also represented in this auction is American painter Michael Loew. Both an untitled piece and one painting from Loew’s Open Spaces series come to auction from his estate. They both represent Loew’s interest in experimenting with color and fragmentation. View each of these lots and register to bid on Bidsquare.