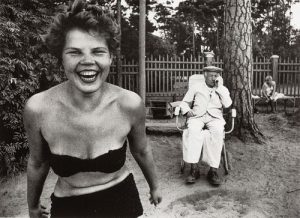 William Eggleston’s interest in photography began after his classmate gave him a Leica camera. Although self-taught, Eggleston was influenced by street photographers such as Robert Frank and Henri Cartier-Bresson. However, he soon broke away from traditional black and white photography and began experimenting with colors in the late 1960s. Considered a pioneer of color photography, Eggleston inspired a generation of future artists. Three Eggleston photographs will be offered in the upcoming auction, presented by WestLicht Photo Auction. One of them is a chromogenic print titled En Route to New Orleans. Taken between 1971-74, the photo shows a hand stirring a drink next to an airplane window.

This auction of over 150 photos includes works from Nobuyoshi Araki, Jaroslav Rössler, and Franz West. Rössler’s untitled still life piece is among the highlights. A Czech photographer, Rössler experimented with abstraction and Cubism. He is considered one of the most important Czech avant-garde and Constructivist photographers of the 20th century. The available image shows a low cylindrical bowl on the lower left. To view the complete catalog and register to bid online, visit Bidsquare.