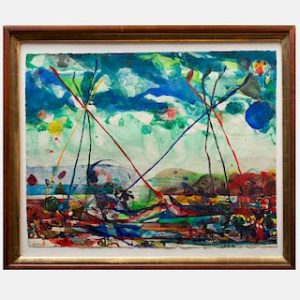 Artist Richard Estes was given a Kodak camera when he was eight years old. His early exposure to cameras inspired him to produce photo-realistic paintings throughout his career. Included in the upcoming 20th Century Modern & Contemporary Fine Art auction, presented by Stair Galleries, is a painting by Estes during his 2007 visit to Antarctica. Although Estes’ work usually depicts city environments, his Antarctica painting still reflects his commitment to Realism.

As the event’s name suggests, each of the auction’s lots represent the major art movements of the 20th century. This includes a 1985 poster promoting an Andy Warhol and Jean-Michel Basquiat exhibition. On the poster, Warhol and Basquiat pose as if they were rival boxers. Also available in this auction are several sculptures. Among the highlighted pieces is Elisabeth Frink’s Chinese Horse III. The figure’s color comes from patina, which is a thin layer of oxidized bronze. Alexander Calder’s Cheval II will be offered as well. Browse the full catalog and register to bid online on Bidsquare