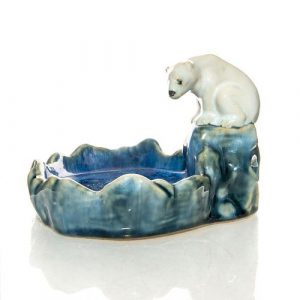 A selection of Doulton, Wilkinson, and World’s Fair Pottery will be showcased on the second day of Whitley’s Auctioneers‘ upcoming Two-Day Ceramic Auction. Featured in this sale are character jugs, liquor containers, advertising ware, and more.

Highlighted in the event is a Wilkinson WWII General Douglas Macarthur character jug. This piece is part of the Allied Leaders Collection and shows the five-star American general seated and holding a pipe. Also highlighted is a Royal Doulton Sir Francis Drake large character jug. The jug was produced in 1988 to commemorate the 400th anniversary of the defeat of the Spanish Armada. A World’s Fair Pottery 1940s ivory creamer set of George and Martha Washington is also featured. Other items found in the auction include a large Doulton character cup of Winston Churchill and a Doulton Lambeth ashtray portraying a polar bear on ice. View the entire collection of ceramics and place a bid at Bidsquare.