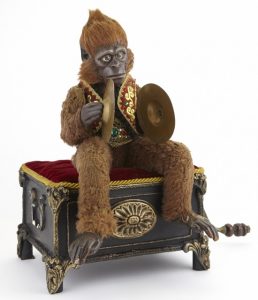 Motivated by a real incident in his personal life, Darryl Zanuck of 20th Century Fox adapted Laura Z. Hobson’s Gentleman’s Agreement novel into a film with the same name. The 1948 Golden Globe Award for Best Supporting Performance in the film, bagged by Celeste Holm, is a highlight of the upcoming Doyle auction. The trophy is among the first awards designed by Marina Cisternas. The 1947 Gentleman’s Agreement film is known for unmasking anti-Semitic attitudes in post-war America.

Another notable lot offered in the sale is a monkey music box from The Phantom of the Opera, the longest-running stage musical on Broadway. The evocative prop was used recently at Her Majesty’s Theatre in London. The monkey with cymbals in each hand is dressed in an embroidered vest and seated on a black box. A personal invitation for two (flights and hotel excluded) to attend the re-opening of The Phantom of the Opera on Broadway will be included with the prop. British composer and impresario of musical theater, Andrew Lloyd Webber, authored the invitation. Another leading lot from a stage musical is Lin-Manuel Miranda’s autographed black-brown pair of boots from Hamilton: An American Musical. Lin-Manuel Miranda signed the leather boots in black ink. To view the complete catalog and register to bid online, visit Doyle.