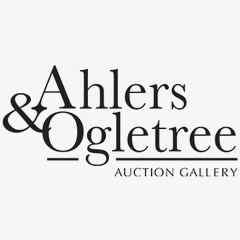 100+ Lots From the Estate of Jack Warner Come to Auction 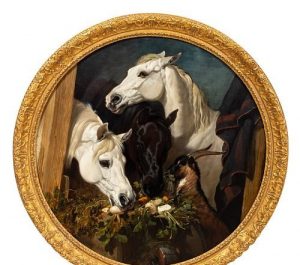 Ahlers & Ogletree will present fine and decorative art, furniture, and other items from the estate of Jack Warner this January. Featured in the sale is an equestrian piece by John Frederick Herring. While Herring began his career painting horse portraits for local inns, he eventually counted the ruling Queen Victoria among his patrons. The painting available in this auction depicts three horses and a goat sharing vegetables.

Other 19th-century paintings available from the estate of Jack Warner include Jasper Francis Cropsey’s A Roadside in England. A member of the Hudson River School’s second generation, Cropsey is particularly noted for his autumnal scenes. In A Roadside in England, the changing leaves cast shade on a dirt path where a man and his livestock pass. Those interested in 20th-century art can consider a bronze statue by Dave McGary. The piece depicts Four Bears, a man from the Mandan Tribe. McGary used his artwork to honor Native Americans. He was also devoted to bronze, a material he used for every aspect of his sculptures. Those interested in this or any other lot can register to bid on Bidsquare.