A debut NFT from American artist Dread Scott recently sold for USD 32,500 during Christie’s Post-War to Present auction in New York. The sold piece, titled White Male for Sale, explores the concept of fungibility in the history of the United States. “The term fungible resonated differently for me due to its use by scholars of the history of slavery,” Scott said in a press release before the event. “People are inherently non-fungible. But as slavery became an integral part of developing capitalism, enslavers sought to make people fungible.”

His work is a 70-second looping video that depicts a white man standing atop an auction block on a Brooklyn sidewalk. Scott was motivated to create the art piece after hearing about the concept of NFTs for the first time.

When slavery was prevalent in the United States, enslaved people were classified into different tiers. A so-called standard tier, also known as tier one, consisted of 25-year-old males. The second and third tiers included unskilled laborers of “lower value,” including the elderly, women, and children. This categorization allowed the slave-owners to dehumanize enslaved people by perceiving them as nothing more than commodities. Scott’s White Male for Sale NFT is an ironic take on this practice, where Scott connects the capitalism and slavery of the past to the modern era.

Dread Scott has spent decades exploring the issues of exploitation and oppression in the United States. His first brush with fame came in 1989 when his work attracted controversy over its use of the American flag. In What is the Proper Way to Display a US Flag?, the artist placed the flag flat on a gallery floor. President George H. W. Bush called the piece “disgraceful,” and the U.S. Senate voted to ban flag display on the ground. This particular event raised many questions about the prioritization of American symbols over artistic freedoms. “Patriotism is often at odds with progress,” Scott suggests.

Scott later participated in a flag-burning demonstration on the steps of the U.S. Capitol Building. He was eventually a defendant in United States v. Eichman. This publicized Supreme Court case determined that flag desecration is a protected form of free speech under the First Amendment.

Scott experiments with a wide range of media such as video, photography, installation,  screen-printing, and even performance. He executed his famous I Am Not a Man performance in September of 2009. The artist strolled along the streets of New York while wearing a protest sign printed with the words “I am not a man.” According to Scott, “… throughout the walk, action in the performance evoked the humiliation that is visited on Black people and the negation that defines our existence.” The hour-long performance alluded to the Memphis sanitation workers’ strike in 1968.

White Male for Sale came to auction on the heels of the artist’s first solo gallery exhibition in over 20 years at Cristin Tierney Gallery. The exhibition, called We’re Going to End Slavery. Join Us!, draws on Scott’s staged 2019 Slave Rebellion Reenactment in New Orleans. This performance reinterpreted the largest uprising of enslaved people in American history. The gallery exhibition runs from September 17th through December 18th, 2021. Scott’s work has also appeared at the Walker Art Center in Minnesota, MoMA PS1, the Pori Art Museum in Finland, and the Brooklyn Museum. 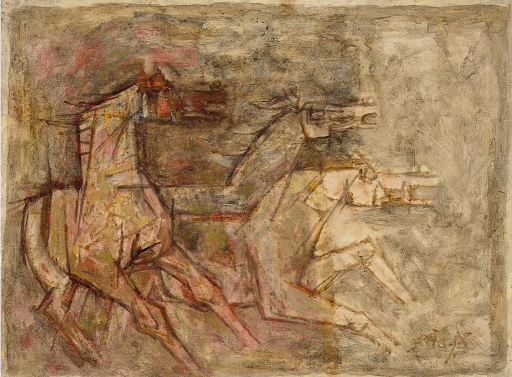 Around the Auction World: September 2021