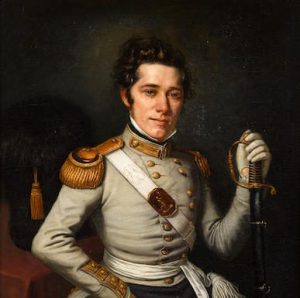 John Neagle’s fascination with portraiture led him to become a self-taught artist at a young age. He started his career as an oil painter in 1815, working on sketches that he sold for five dollars each. Neagle’s work often used iconography to portray his subject’s profession or important experiences. Throughout his long career, Neagle depicted several prominent figures in Philadelphia, including an officer of the Philadelphia Artillery Regiment. This particular oil on canvas piece by John Neagle will be featured in the upcoming Home & Interiors auction, offered by Bonhams.

The event will feature over 400 lots, ranging from furniture and decorative art to collectibles and sculpture. A standout piece among them is Thomas Kirby Van Zandt’s Fast Trotter. Van Zandt, a New York painter active in the 1850s, was known for his folk art depictions of racehorses and livestock. His works were mainly popular among Albany’s elite citizens, including Erastus Corning and Judge Van Aernum. View this auction’s full listings and register to bid on Bonhams.