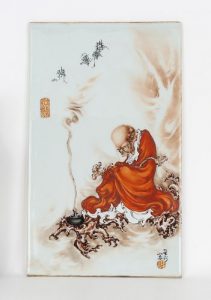 Jon Corbino was only 21 years old when the Art Institute of Chicago exhibited his works. His “Heroic” paintings often portrayed subjects that were uncommon at the time, including refugees, people in wartime, and families in the style of the Baroque Masters. Dancer, a painting by Corbino, features an athletic person with strong physical features. This piece is available in the upcoming Old Masters, Fine Art, Antiques & Jewelry auction, presented by Helmuth Stone Gallery. Among Old Masters, Chinese modern artist Wang Bu (1898 – 1968) made his mark with his works in porcelain panels. A Wang Bu porcelain plaque depicting a seated scholar in rust red is available in the upcoming sale.

A 16th-century Flemish paintng, titled Susana and the Elders, explores the concept of lust through the Biblical story of Susana. A married woman, Susana is accused of promiscuity by two elderly men who lusted over her. Susana is proved innocent when the two men are put on trial. There are many paintings of the scene where the two men accost Susana. The available version, an oil on cradled wood panel, is attributed to the Master of the Prodigal Son. Find over 400 lots of fine art, estate jewelry, Chinese porcelain, bronzes, and more on Bidsquare.