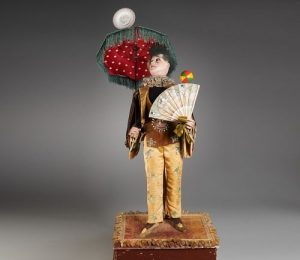 Gustave Vichy was 23 years when he saved his failing family business by focusing on musical automata in place of mechanical toys. His wife sewed clothes for dolls while he handled the mechanical aspects. Merging these skills, Vichy became the first manufacturer to produce automata from a single workshop. He pioneered improved sound construction and elaborate costumes. Soon after Vichy died in 1904, the company went bankrupt. Several pieces of vintage Vichy automata will be available in the upcoming Millea Bros auction. The automata are well preserved and in working condition.

The event also features an assortment of Continental, Modern, and French fine artworks. Two Pablo Picasso etched monoprints are among the leading lots. These prints reflect Picasso’s experiments with photography. Only one known image from this series has come to auction. Dated 1945, this piece indicates that Picasso’s experiments go back a decade earlier than previously believed. View the complete catalog or register to bid on Bidsquare.