Vintage Photos of Marilyn Monroe, Christy Turlington, and Other Celebrities at Lion and Unicorn 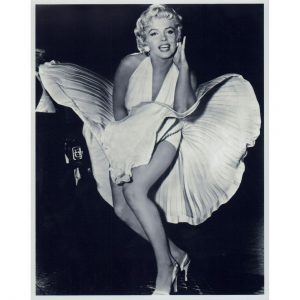 This July, Lion and Unicorn will present over 375 lots of vintage celebrity photographs. The upcoming auction particularly highlights photographs of Hollywood star Marilyn Monroe. Before Monroe was a household name, she struggled to break into the film industry. She worked as a photographer’s model in the early days of her career. Monroe remained in front of the camera’s lens after scoring leading film roles. This Lion and Unicorn sale will feature a selection of Marilyn Monroe photos from throughout her career. Bidders will recognize familiar poses in the catalog, including her iconic white dress flaring above a grate. Sets of unused Monroe postcards are also on offer.

Other American and European actresses are also represented in the catalog. A photo of American model Christy Turlington is one leading lot. Turlington entered the modeling industry in the 1980s, nearly 30 years after Monroe. She became one of the world’s first supermodels and the public face of various brands. This auction will present a black and white photo of Christy Turlington from the early 1990s. Collectors can also consider photos of Grace Kelly, Hedy Lamarr, Kim Novak, and others. To view the complete catalog of celebrity photographs and to place a bid, visit LiveAuctioneers.