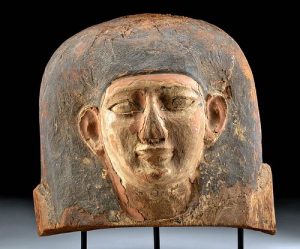 The deification of animals in ancient Egypt existed long before its unification around 3100 B.C.E. Ancient communities worshipped images of animals such as dogs, cows, and sheep. Among the most preeminent animal cults were the bull cults, which appeared during the first Egyptian dynasty. Bulls served as symbols of courage, strength, and fighting spirit. The Apis bull cult believed that the god Ptah, the creator of the universe and master of destiny, was incarnate in the form of a bull named Apis. A silver amulet representing Apis highlights the upcoming auction, presented by Artemis Gallery. The figure stands on four hooved legs in a forward striding position. Its muscular body is adorned with incised decoration.

In Mayan culture, the greenstone represented both earthly life and the eternal life of the spirits. These stones were highly treasured as they had the same color as sprouting maize. The Maya people carved greenstone articles to emphasize the elite rank of individuals wearing them. These objects were often passed from generation to generation. A pre-Columbian Maya serpentine mask is among the key lots. The intricately carved mask features oblong eyes, a triangular nose, parted lips, and incised ear coverings. Explore these items and register to bid online on Bidsquare.