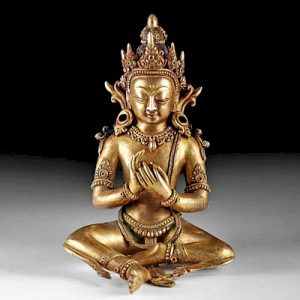 The Ancient and Ethnographic auction offered by Artemis Gallery features a variety of antiquities from around the world including pottery, jewelry, and textiles.  Dating from the 2nd century BCE to 20th century CE, the range of objects is vast and with bids starting from $100-$1,800, provides an accessible opportunity for the discerning collector.  Featured items include a Roman lead sarcophagus panel from the Imperial Period, a Northwest Coast wolf head carving, and Egyptian mummy masks with faint traces of paint still visible. There are also several Near East, Asian, and Spanish Colonial antiquities.  Preview the full catalogue and register for the legally sourced auction at Bidsquare.