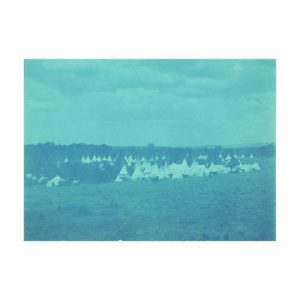 Inspired by their customs and traditions, Edward S. Curtis spent his career photographing the lives of Native Americans. He compiled photographs and prints from his many years of travel in a collection of books, together titled The North American Indian. A group of Edward S. Curtis’ cyanotypes from Volume VI of The North American Indian will lead Bonhams’ upcoming The Curtis Studio auction. The set includes 26 cyanotypes and features images of Cheyenne tribes.

A Curtis Studio album of 149 gelatin silver prints taken for the Nai Project is also available. The prints include pictures of the Southwest and Northwest tribes. Some of the photos in this album feature Yakima, Blackfoot, Hopi, and Navajo individuals. A billboard poster for In the Land of the Head Hunters is on offer as well. Rounding out the catalog are Curtis photographs and ephemera from a private collection. Interested bidders can view the full catalog or place a bid online on Bonhams.