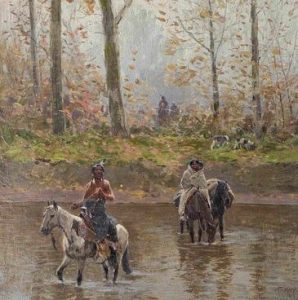 Henry Farny’s paintings focused on recreating peaceful scenes of Native Americans living their everyday lives. His subjects were authentically presented and were shown in harmony with their natural environment. Moving Camp, one of Farny’s many noted works, depicts members of a tribe traversing a shallow river on their horses. The painting was produced in 1905 and is available in the upcoming auction of Western Paintings and Sculptures, presented by Hindman. It shows hints of the Düsseldorf school of painting that Farny engaged with in his early career.

Also available in the event is the 1986 Ritual Dance of the Moon Hunters by American painter Earl Biss. The oil painting uses many colors to show a group of Native Americans. Biss described his work as “a concept of reality drawing from spontaneous abstractions, and controlled with the subtlety I wield as the creator.” Sculptures, including Grant Speed’s The Half Breed, are also on offer. This piece showcases a woman’s uplifted face with closed eyes. View these lots or place a bid by visiting Bidsquare.