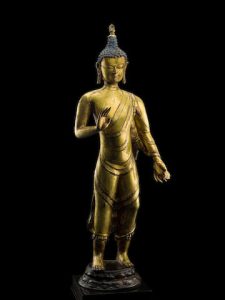 Bonhams will offer a notable Tibetan standing Buddha statue in its upcoming Indian, Himalayan & Southeast Asian Art auction. This gilt-bronze piece depicts the Buddha in a standing position with a raised right hand. His left hand holds the edge of his robe. Many Tibetan images of the Buddha place him in a seated position with his right hand forming the ‘earth-touching’ gesture, making this piece unique. Standing more than two-and-a-half feet tall, this Central Tibetan figure was made in the 11th or 12th century CE.

Another available item is an Indonesian andesite figure of Ganesha. The elephant-headed Hindu god of beginnings is known as the ‘remover of obstacles.’ Carved from volcanic rock taken from the island of Java, this figure of Ganesha has an elephant head. Two of his four arms rest on his lap and the soles of his feet touch. The sculpture portrays Ganesha sitting on a lotus flower. View the entire auction and register to bid by visiting Bonhams.