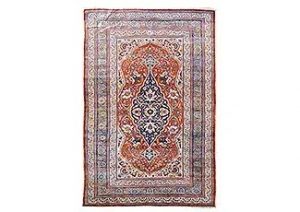 The upcoming Exceptional Auction of Antique & Vintage Rugs, presented by 1stbid, will particularly feature a fine Turkish silk Hereke rug. During the mid-1800s, the Sultan of the Ottoman Empire recruited some of the best weavers in the land to establish a new royal workshop in the town of Hereke. Before long, high-quality rugs emerged. The craftspeople used a combination of silk, cotton, and wool threads to weave their masterpieces. The available Hereke rug features tightly coiled patterns of flowers, vines, and arabesques in muted shades of gold, salmon, and pale green. Another notable rug in the auction is an antiqe silk Persian Heriz rug. This example bears a bold center medallion and a triple border.

Beyond Persian carpets, the catalog brings a robust collection of French Art Deco rugs from the early 20th century. These carpets depart from traditional symmetry and subtle shades. Instead, they embrace bold patterns and spontaneity. Among them is a French area rug that references the paintings of Joan Miró. Amorphous shapes cover the rug, sometimes resembling a human face or a small picture. The rug relies heavily on the primary colors (red, yellow, and blue) against a nondescript background. To bid in this and other online auctions, visit Bidsquare.