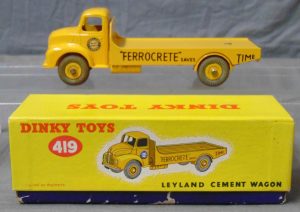 With over 500 lots, the upcoming Toys, Trains, Diecast, & More sale, offered by Weiss Auctions, will include a selection of vintage action figures, toy automobiles, and train sets. One of the key pieces in the auction is a boxed Batman action figure. The character, created by artist Bob Kane, was first introduced in Detective Comics #27 in 1939. Later appearing in stories published by DC Comics, the Batman character eventually became a pop culture icon. This vintage toy comes with the original instruction sheet, grapple, and sliding cord.

Another item on offer is a Lionel Factory Prototype 1964 Hudson. Joshua Lionel Cowen, the co-founder of Lionel Corporation, got his start in the industry by designing model trains such as the Electric Express. After a few years, he went on to establish the Lionel Manufacturing Company. Also highlighted in the sale is a Marklin Gauge 3 Live Steam American set from 1910. The complete set includes a hand-painted “kaiserliche” postal car, a French restaurant car, and a French sleeper train. View the complete catalog for this auction by visiting Invaluable.