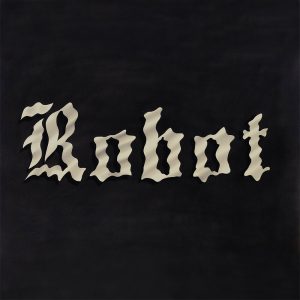 “Life is more like an off-center love story than it is a straight-ahead…narrative,” says art collector Fred Clarke in an interview with Christie’s. The Thirty-five Works by Ed Ruscha auction, presented by Christie’s, comes entirely from the Clarke Collection, the private holdings of Fred and Laura Weir Clarke.

Clarke’s view of an off-center love story echoes throughout the work of Ed Ruscha.

Ruscha is a member of the pop art movement and often uses unusual text with equally unexpected typography to set the mood of his pieces. A great example, with the highest estimated value, is “Wavy Robot”, made with gunpowder on paper. The word “Robot”, which we often associate with advanced technology and the future, is written in a traditional font with very precise ridges. The black background forces viewers to focus on the relationship between the word and font.  In “Kidney Beans on Galvanized Steel”, another highly estimated piece, Ruscha plays with space along with the text. The light pink hue in the right-hand corner distracts attention away from the already cryptic text.

The art collector Fred Clarke’s first experiences with Ruscha’s work were his books. Collectors looking for a different and slightly more affordable piece should consider the lot with several of Ruscha’s books, including “Thirty-four Parking Lots in Los Angeles” and “Nine Swimming Pools and a Broken Glass”. Those interested in any of these lots should register to bid on the Christie’s website.