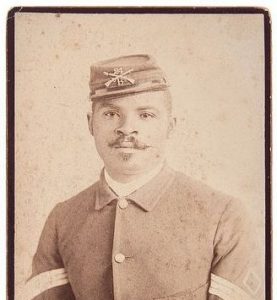 Camilius S. Fly’s photo of an unidentified Buffalo Soldier is up for bid in Cowan’s Auctions’ upcoming The Road West sale, featuring the Steve Turner Collection of African Americana. Fly served as the principal photographer of Tombstone, Arizona beginning when he moved there in 1879. He took well-known photographs of Geronimo, Apache warriors, and a number of the outlaws and lawmen that made Tombstone famous. There are no other Fly photos of Buffalo Soldiers or African Americans known to exist, and his negatives were destroyed in a series of studio fires.

Another key item in the sale is a first edition copy of Afro-American Freeman’s Light, a collection of poetry and musical compositions by Thomas Young. Born a slave in 1860, Young educated himself so he could write letters home to his family. The auction house says the book is in near-pristine condition, and there are only four known copies that still exist. Other items in the sale include a 42-star 10th Cavalry guidon flag, the first issue of All-Negro Comics, several early photographs of figures such as Frederick Douglass and “Stagecoach Mary,” and more. View any of these lots from the Steve Turner Collection of African Americana and register to bid on Bidsquare.