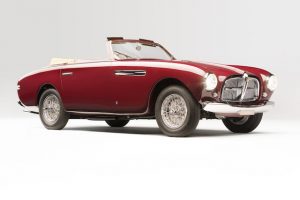 The 1932 Alfa Romeo 8C 2300 Cabriolet Décapotable, available in the upcoming Scottsdale Auction presented by Bonhams, was originally shipped to France in pieces. As tensions grew between France and the Mussolini dictatorship in Italy, companies needed to find inventive ways to transport goods without steep taxation. These included bringing cars across the border in parts and rebuilding them later. The Alfa Romeo available in this auction was shipped to France in this way and is one of only five surviving 8C 2300 cars that was bodied by notable carmaker Giuseppe Figoni.

Beyond the Romeo, bidders will also find a 1951 Ferrari 212 Inter Cabriolet among this auction’s lots. The 212 was primarily a racing car, and drivers finishing in both first and second place in the 1951 Carrera Panamericana drove the model. The first owner of the 212 available in this auction was Peter Staehelin, co-founder of the Ecurie Espadon race team.

Also presented is a 1969 Lamborghini Miura S, the third model produced by the Italian luxury car company. The car was owned by the same family for over 40 years. It also retains the original engine and bodywork. Another lot preserved over decades is a 1923 Hupmobile Roadster Coupe. The car was left on stands in Culver City, California for 53 years. When a buyer used the car for the first time in decades in 2018, it soon attracted media attention. The car was later used in an NFL skit with Jay Leno and Peyton Manning, in which Leno taught Manning how to drive a manual transmission. Register to bid and view each of these lots on Bonhams’ website.