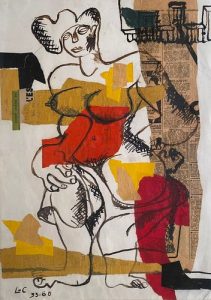 Kees van Dongen, a Dutch-born French painter, is best known for his contributions to Fauvism around the turn of the 20th century. One of his oil paintings, titled Windmill in a Landscape, will be featured in the upcoming Guernsey’s auction. This 1895 work is painted in shades of olive green, yellow, and brown. It comes from the collection of Nicholas Zoullas, a Greek immigrant who fled persecution during World War II. He began collecting fine art during the 1980s, gradually building a diverse collection of 19th– and 20th-century works. Another Greek artist featured in the Zoullas Collection is Constantinos Parthenis, a Cubist and Modernist who helped introduce light and color into Greek painting. The signed piece shows a larger-than-life woman kneeling in a cityscape.

Several paintings from Terry Rodgers are also on offer. These works, made between 2003 and 2004, show what the artist describes as “contemporary body politics.” One of the works, titled Beaujolais Nouveau (New Wine), shows a nude, collared woman sitting beside several wine glasses. Behind her, a half dozen figures look away from the viewer. Viktor Olivier Gilsoul’s painting titled Painter’s Studio shows a richly decorated office with a fireplace and messy bookshelf. Several sculptures are also available, including a 16th-century Thai Gautama Siddhartha figure and a contemporary ceramic sculpture by Robert Combas. Explore the full catalog and register to bid online by visiting Bidsquare.