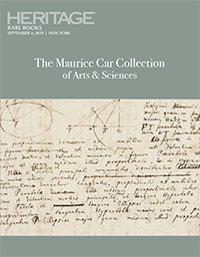 The Maurice Car Collection of Arts and Sciences Featuring Rare Books & Manuscripts, is a sale offered by Heritage Auctions. Among the most valuable and rare of the pieces up for bid is an autographed Latin manuscript by Sir Isaac Newton: “Notes on Physics and Solid Geometry, with Two Diagrams.” The manuscript written by Newton with brown ink has thirty-four lines of text appearing on the recto(right) and seventeen on the verso(left). Some of the lines have been crossed out and there are two diagrams on the verso. Newton autographed manuscript is rare, especially anything relating to his work in the sciences.

One of the more unusual visual art is an unsigned original abstract Picasso ink drawing. On the reverse is a small caption written by Picasso’s friend, surrealist artist and writer Valentine Hugo. It states that this drawing was done by Picasso at her place in 1942, experimenting with some of her father’s music pens with multiple tips. Also, in this lot are three ink pens believed to have been used by Picasso.

This sale also includes an archive of over 20 letters and postcards by Ezra Pound, most of them on his personal stationary. Ezra Weston Loomis Pound (1885-1972) was an expatriate American poet and critic, a major figure in the early modernist poetry movement, and his contribution to poetry began with his development of Imagism, a movement derived from classical Chinese and Japanese poetry. Imagism stressed clarity, precision, concision, and an economy of language. For more information about the complete archive, and any other lot, see the lot description in Heritage Auctions.