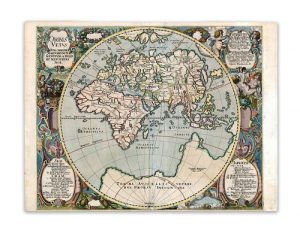 Farhad Vladi first imagined himself buying and selling islands after reading an article about such a transaction in Seychelles. The article, it turned out, was fake, but Vladi nonetheless went on to sell over 2,000 private islands over the next 50 years. Every time Vladi represented an island, he sought antique maps of it and the surrounding region. This curiosity led to a wide-ranging collection of maps that Guernsey’s now brings to auction.

Featured in this event is the Theatrum Orbis Terrarum atlas (1574) by Abraham Ortelius. The creation of the Ortelius atlas marked the first time that maps by various cartographers were printed uniformly and arranged cohesively, leading many to consider it the first modern atlas. The title page contains an allegorical depiction of each known continent, with Europe presented as the queen.

Also available is the Tabulae Geographicae atlas (1585 & 1589) by Gerard Mercator. Maps of France, Germany, the Benelux countries (Belgium, the Netherlands, and Luxembourg), Italy, and the Balkans are included in this atlas. Near the end of the work are two maps presumably added by Mercator’s son after the cartographer’s death. Those looking for more maps of Asia, Africa, and the Americas will find several included in Frederick de Wit’s General Atlas (1656-1666). Those interested in this or any other lot can register to bid on Bidsquare.