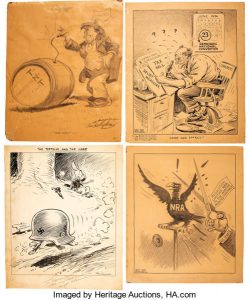 Jack Kent was a prolific American cartoonist and author-illustrator best known as the creator of the King Aroo comic strip. He was also a collector of the work of other comic artists, and the upcoming Great America Comic Strip Online Auction, offered by Heritage Auctions, will feature original items from Kent’s collection. One key lot is an original Hal Foster Prince Valiant Sunday comic. Prince Valiant is an American comic strip that was created by Foster in 1937 and has been told in a continuous story ever since.

Other well-known characters in the sale include a drawing of Bugs Bunny and Elmer Fudd standing back to back, as if preparing to duel. In the drawing, Bugs has white-tipped ears, a feature that was phased out around 1940. There is also a production cel of Mickey Mouse from the Academy Award-nominated short The Brave Little Tailor. The cell is hand-inked and hand-painted, appearing at approximately the 2:51 mark in the film.

Beyond comics, a pinup image by Milton Caniff and a Winsor McCay chemical warfare editorial illustration will be presented. Other lots include a Gordon Hope Grant picture of a woman with her pug dog and an illustration of an Eskimo scene by Rockwell Kent. View any of these lots and register to bid on Heritage Auctions.