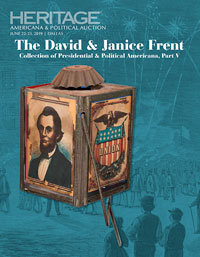 David and Janice Frent spent decades collecting a wide variety of political Americana. Their work was not in vain, as the New Jersey couple eventually held the world’s largest, most extensive, and most valuable collection of American political artifacts. Heritage Auctions has since acquired the items, which continue to appreciate in worth as the years pass.

Heritage now offers the fifth installment of these remarkable objects to collectors in their upcoming auction. It features all types of political and presidential memorabilia, from campaign flags and buttons to portraits and cartoons. With opening bids ranging from $100 to $15,000, this auction is accessible to everyone.

Presidential hopefuls are included alongside the founding fathers: George Washington’s inaugural buttons and Eugene V. Debs’ socialist posters are both highlighted. Two sought-after artifacts of American politics include an exquisite paper and tin lantern used during Abraham Lincoln’s rallies and an 1868 campaign flag for Ulysses S. Grant. View the complete catalog and register to bid online on Heritage Auctions.