The Collection of A. Jerrold Perenchio | Chartwell: An Henri Samuel Commission 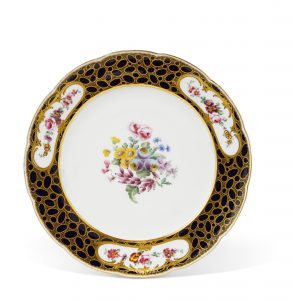 Axminster Carpets Ltd. was an English carpet manufacturing company founded by Thomas Whitty in 1755. During his visit to Cheapside Market in London, Whitty was influenced by the Turkish carpets on display. After returning to Axminster, Whitty taught himself to weave and produced a similar quality rug. The hand-knotted carpets by the self-taught weaver soon became popular among the British royals and upper class. The upcoming Christie’s auction presents several Axminster carpets by Whitty, including a 1780s George III carpet. As an ardent botanist, Whitty had an affinity for flowers, which is visible in the blossom-filled central medallion and border design.

Another highlight is a colored lithograph by Henri de Toulouse-Lautrec titled Moulin Rouge – La Goulue. Toulouse-Lautrec was a famous Post-Impressionist artist whose work is associated with the Parisian theatrical life of the 19th century. The available 1891 lithograph was a commission for the Moulin Rouge cabaret after it opened in 1889. Posters for the cabaret starring dancer La Goulue are among the most sought-after Toulouse-Lautrec artworks. The catalog will also include Louis XVI-style furniture, Puiforcat and Buccellati silverware, and Lawrence Holofcener sculptures. Interested collectors can browse the catalog and register to bid online on Christie’s.