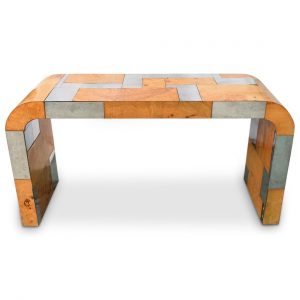 Interior design collectors will find pieces by Paul Evans, Billy Baldwin, and Adrian Pearsall in the catalog. One of Evans’ signature Cityscape benches is a leading lot. Characterized by an irregular mix of metal and wood, the Cityscape series emphasizes light and patterns. A brutalist cube by Pearsall is notable as well. While brutalism started as an architectural movement, the rugged and industrial style later spread to furniture and interior design. The available cube features brutalist rough edges, bronze finishes, and stark surfaces. Those interested in fine art can consider works by Patrick Schiavino, Tom Wesselmann, Mariam Miller, and Alissa Siegel. Visit LiveAuctioneers for the complete catalog and to place a bid.