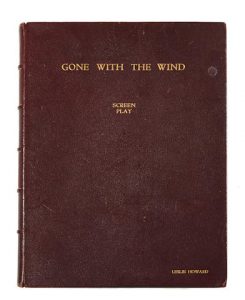 From The Wizard of Oz to Gone with the Wind, 1939 was a notable year in cinematic history. The upcoming TCM Presents…1939 auction, presented by Bonhams, offers film memorabilia related to that year’s productions. Some lots, such as a pair of gloves worn by Kermit Eller in his portrayal of Darth Vader, come from later eras in Hollywood.

Among the highlighted lots is a test wand used by Glinda in wardrobe shots for The Wizard of Oz. Billie Burke, the actress who portrayed Glinda, kept this particular wand after filming to take holiday photos with it. She then returned the prop to MGM, where it was auctioned and held in a private collection for decades.

Representing Gone with the Wind in this auction is a contract from author Margaret Mitchell selling the film rights to her novel. Also available is a final shooting script for the film, gifted by producer David O. Selznick to one of the film’s stars, Leslie Howard. Selznick signed the script with the following message: “For Leslie- / with the profound / (but probably futile) / hope that he’ll / finally read it! / Xmas, 1939.” Register to bid for this auction on Invaluable