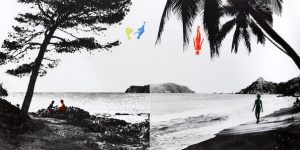 Art has long influenced the everchanging opinions and has instilled values in our society.  Art began to take on a new look with new, brighter colors, emotional expressions, and experimentation with abstracts.  Artists sought out new approaches and ideas to art, both individually and collectively. Through abstract expressionism, modern art was created. Modern art brought about artists such as Monet and Picasso, Kandinsky and Kusama, and many more.  These great painters, sculptors, and creators went on to inspire the artisans of the 20th and 21st century and the contemporary art scene.

In keeping with modern art movements, contemporary art explores both personal and cultural identities of our time.  It is more globally influenced and culturally diverse. With featured artists such as Andy Warhol, Keith Haring, Tom Wesselmann, and others the Summer Refreshments auction presented by Bonhams is offering a look at all their creations.

A 2016 aluminum multiple titled Chance by Alex Katz, that shows three women in swimsuits in various stages with beach balls, is featured in the auction alongside a 1991 Tom Wesselmann screen-print of a colorful doodle depicting a blonde woman.  The auction also offers a vibrant Andy Warhol lithograph titled “Marilyn Invitation” published by Castelli Graphics for Andy Warhol: A Print Retrospective 1963-1981. Will Barnet’s 1976 “Summer Idyll” screen-print and lithograph on wove paper shows a woman lounging in a hammock surrounded by trees with a body of water in the background.  “Grammy” is a lithograph from artist Kenny Scharf also on wove paper that was created for the 39th Annual Grammy Awards.

With prices ranging from $600 to $60,000, a seasoned collector or a one-time buyer can find piece of modern and contemporary art they might admire. To view all twelve of the prints, visit Bonhams today.