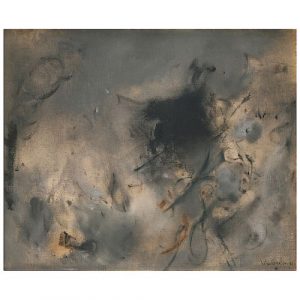 The Summer auction of Modern & Contemporary Art, offered by Morton Subastas, is a single-night auction consisting of paintings, drawings and sculptures from Mexico and Latin America. Among the most valuable pieces offered is a small, haunting work by Sergio Hernández, in which the ghostly figures seem to be spiriting toward the viewer. Hernández is a Mexican postwar, contemporary painter born in 1957. His work has been featured in many museums including Palazzo delle Esposizioni and the Latino Art Museum, and two of his paintings can be found here.

In contrast, a more playful drawing (though admittedly disturbing at first glance) by Lalo Sánchez del Valle, is titled “Psico Van Gogh” (which translates “Psycho Van Gogh”). It is a reinterpretation of Vincent Van Gogh’s “Self-Portrait with Bandaged Ear and Pipe”. The original was painted while Van Gogh was institutionalized and after he had attempted to cut off his own ear. This new version is unmistakable in its use of the original as source material, but shows the face of a man no longer in touch with reality, alarmingly bringing the artists inner turmoil to the surface.

Also featured is a large panoramic landscape-style painting comprised of 15 total pieces of oil on wood. The full work measures 2.75 x 10.20 meters, and vividly demonstrates a kind of distorted realism that is both attractive and disorienting. The auction further includes a fine selection of self-portraits by varied Latinx artists such as José Luis Cuevas, Carlos Orozco Romero, Ana Mercedes Hoyos, and Arnaldo Roche-Rabell. View all of these lots and register to bid on Bidsquare.