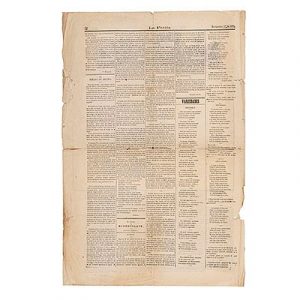 The Subasta Libros y Documentos de Exploradores y Viajeros, Mapas, Vistas, Ciencia y Religión is offered by Morton Subastas. A collection of fine antique books and documents, this auction has a number of exceptional items such as the handwritten Primera Parte de los Problemas y Secretos maravillosos de las Indias (First Part of the Wonderful Problems and Secrets of the Indies) by Juan de Cárdenas. Cárdenas was born in Constantina (Seville), and moved to Mexico in 1577, when he was fourteen. He studied arts and medicine in the University of Mexico, where he published the offered work in 1591. Both the approach of the book and its style conform to the scholastic version of the European scientific culture, which Cárdenas likely learned at the university.

Another of the rare edition books up for bid is American Ornithology; or The Natural History of the Birds of the United States by Alexander Wilson. This work is illustrated with plates engraved and colored from original drawings, taken from nature. Wilson was a Scottish-American poet, ornithologist (bird expert), naturalist, and illustrator. Most importantly with regards to the book in question, Wilson is often regarded as the greatest American ornithologist prior to James Audubon. Furthermore, a 2013 biography of Wilson indicated that his illustrations of birds in natural poses was an inspiration for Audubon and many other illustrators and naturalists who followed in his footsteps.

Among the fine examples of antique maps in this gathering is one of the Americas by Gerard and Leonard Valck. Gerard Valck was born in Amsterdam on 30 September 1652. He was a student of Abraham Blooteling and later married Blooteling’s sister. He spent time in London with Blooteling in 1672 and engraved many portraits of English nobility. While in Amsterdam, he had a close partnership with his son Leonardus (Leonard) Valck, with whom he published atlases, maps, globes and other prints. The map here for sale shows California as an island, and is very close to an earlier Allard map of 1700 with an almost identical cartouche.