Statues and Paintings of Buddhas, Bodhisattvas, and Deities Come to Auction 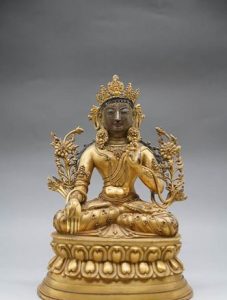 Known as the goddess of compassion and mercy, Guanyin is one of the principal deities in Chinese Buddhism. She is often depicted holding the pearls of illumination, a willow branch, or a vase of pure water in her hand. Folklore states that Guanyin was a Buddhist who led a virtuous life and earned the right to enter Nirvana after death. However, as she stood before the gates of Paradise, Guanyin heard a cry of anguish from below. Moved by the pain of the people, she renounced her reward and vowed to help humans. The upcoming Ocean Star Auctions event presents several sculptures and paintings of Guanyin and other bodhisattvas.

The auction also highlights several figure paintings by Chinese artist Zhang Daqian. Born into an artistic family, Zhang is known for his splashed-ink landscapes and lotus paintings. Zhang’s works were influenced by ancient Chinese masters such as Shitao, Tang Yin, and Bada Shanren. Each one of the available pieces bears a Zhang Daqian mark. The auction also offers carved jade statues, Buddhist scriptures, Chinese ceramics, and jewelry. Interested bidders can explore the full listings and register to bid online on Bidsquare.