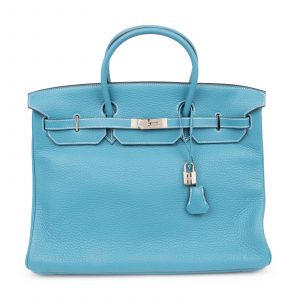 Birkin handmade tote bags were first introduced in the 1980s by Hermès, the French luxury brand. A turquoise leather Birkin bag by Hermès is a highlight of the upcoming Spring Fashion and Accessories auction, to be presented by Hindman. It is designed with silvertone hardware and includes a vinyl rain protector. The Birkin bag was named after English actress and singer Jane Birkin. In 1983, Hermès chief executive Jean-Louis Dumas was traveling by flight to London with the actress-singer seated next to him. Birkin mentioned to Dumas that she hadn’t been able to find a suitable leather weekend bag. The following year, Dumas created a black leather bag for her and the line was named “Birkin.”

Another highlight is a Mariano Fortuny peplos dress belonging to the early 20th century. The pink silk pleated dress has a satin pull cord at the neckline, as well as hand-painted Venetian glass beads. The method of pleating used to create this dress remains unknown. Another interesting lot is a collection of designer costume jewelry from the 1960s to the early 2000s. To view the complete catalog and register to bid online, visit Hindman.