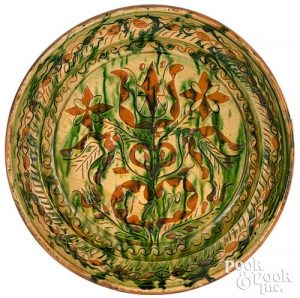 A sgraffito redware charger by 18th-century potter George Hubener headlines the first session of this single-owner sale from Pook & Pook. Using the sgraffito technique of scratching away to reveal a second layer of color, the potter creates two intersecting patterns in green and orange. In his career, George Hubener was regarded as a perfectionist dedicated to traditional forms. “He who can make something is esteemed. The unskilled no one regards,” inscribed Hubener on one of his dishes.

Several schranks, or “clothes closets,” also headline this single-owner sale. Schranks became a popular furniture piece in Germany starting in the 17th century. Many owners painted their schranks to add a pop of color to their homes, such as the yellow and teal example on offer in this sale. Others went for a sleeker look. That includes the walnut schrank that is among the auction’s featured lots.

Beyond furniture and decorative art, bidders will find a birth certificate from the 18th century. The document announces the birth of Johanes Krum in 1780. The piece also comes with a maple frame. Those interested in this or any other lot can register to bid on Bidsquare.