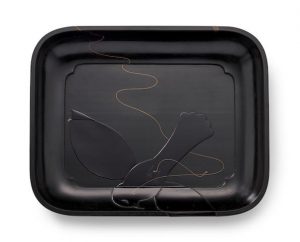 Japanese artist Shibata Zeshin’s use of black lacquer set him apart from his contemporaries. Famously known as the ‘Urushi Master,’ Zeshin created lacquerware cups, trays, and panels. The upcoming Bonhams auction presents a black lacquer tobacco tray from the Meiji era by Shibata Zeshin. The tray’s details demonstrate his command of the subori technique. Another highlight of the sale is a Mino stoneware koro from the Momoyama or Edo era. The stoneware incense burner features brown iron oxide geometric patterns with a cream and crackle glaze.

Japanese netsuke are other notable lots in the sale. Netsuke were primarily used as fasteners to hold tobacco pouches and seals. These miniature sculptures became popular fashion accessories during the 17th century. Craftspeople made netsuke using wood, ivory, lacquer, and other materials. This auction will feature a set of 14 lacquered wood mask netsuke from the Edo era. The set includes miniature versions of the Noh mask of Hannya, the mask of Otafuku, the Kyogen mask of Baku, and others.