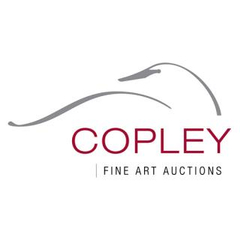 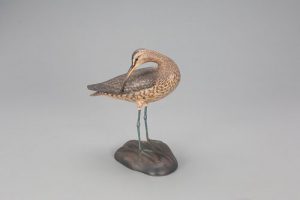 A. Elmer Crowell’s decoy depicting a preening curlew is one of the highlighted lots in the upcoming Winter Sale 2021, presented by Copley Fine Art Auctions. The 1941 sculpture depicts a curlew bird with its head arched back to groom its feathers. A 20th-century decoy carver, A. Elmer Crowell was known for his American wildfowl sculptures. Crowell spent his early years observing and hunting Cape Cod’s birds, which helped him gain an understanding of avian anatomy. Later, this learning would allow him to incorporate life-like details in his work.

The sale also features John Charles Terelak’s Dory Fisherman Off the Grand Banks. Many of Terelak’s works experiment with new techniques, distinct compositions, and color combinations. “Every painting takes a life of its own as it develops and evolves, taking the artist along for the ride,” he once said. The available piece shows three long-line dories returning to a fishing schooner to unload their catches. Paintings, sculptures, firearms, and sporting decoys are available in the auction catalog. Register to bid for any of these lots by visiting Bidsquare.