Selected Meissen and Other Ceramics from the Collection of Henry H. Arnhold 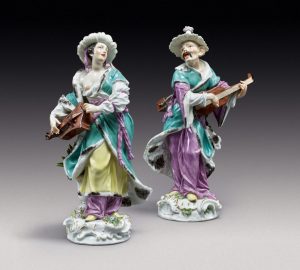 To benefit the Arnhold Foundation, Sotheby’s presents the Selected Meissen and Other Ceramics from The Collection of Henry H. Arnhold Auction. Henry Arnhold adding to his mother’s collection assembled one of the greatest private collections of Meissen porcelain outside of Dresden.

While the world considers Böttger as the inventor of Meissen, in reality, he had learned the porcelain making technique while working with the mathematician Ehrenfried Walther von Tschirnhaus. The porcelain manufactory later rose to fame under the leadership of master modeler Johann Joachim Kändler. This sale of early Meissen porcelain includes figures by Kändler. Harlequin figures produced by the artist were inspired by the Italian comedy theatre, Commedia dell’arte. A similar figure from the Commedia dell’arte group of ‘The Indiscreet Harlequin’ is offered at the highest estimate in the auction. Chinoiserie and Hausmaler-decorated wares, Kakiemon and Imari Meissen porcelains, as well as Japanese and Chinese prototypes, are also available. Explore the full listings and register to bid online on Sotheby’s.